How to Drill Wide Receiver Screens

Learning to drill your wide receiver screens effectively and efficiently makes your offense a true, full-field attack. The drill doesn’t require pads and you can get lots of reps, so you can get good at it quickly.

And when you get good quickly, you’ll have the defense running from sideline to sideline in no time.

How to Setup and Run the Drill

This drill is set up using the entire width of the field mimicking our landmarks for our receivers (numbers & hash marks).

We utilize trash buckets as defenders on the perimeter. We will work to set up those trash barrels much like our opponents will align each week to give our receivers and backs aiming points for their blocks.

Those trash buckets could easily be replaced by defenders if you wish to adapt the drill, but we utilize this as a non-contact tempo-based drill. Adding defenders may slow down the tempo of the drill which is why we only utilize buckets. Plus, we don’t have to coach up the buckets where to line up.

On the interior, we have two trash barrels set up where our offensive tackles would be lined up to help serve as landmarks, but more importantly to be a funnel for our jailbreak screen portion of the drill.

Phase 1 of the Drill 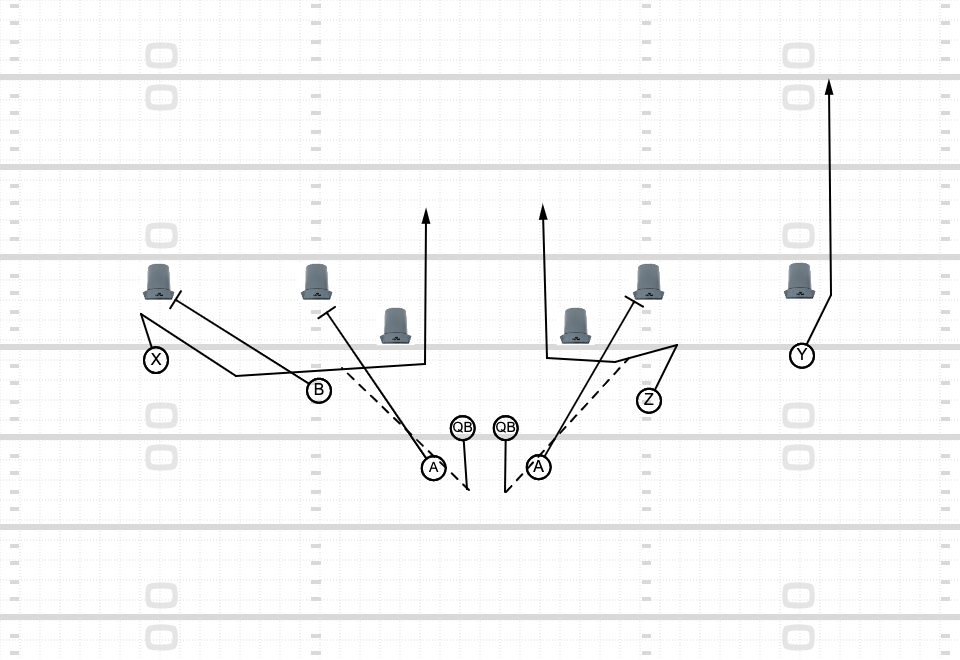 In the first iteration of the drill in the above drawing, we line up our receivers in our base 2×2 formation but utilize 2 quarterbacks and 2 running backs to maximize the work we can do.

This drill is designed to get you multiple and high tempo reps at screens. I would estimate we can get 20+ reps each of all of our screens in just a 10-minute period (80 total.) You have to be highly organized and up-tempo to get that many repetitions, but it can be done.

Our perimeter players attack the trash barrels with correct blocking angles, break down and shoot their hands on the bucket. After they have blocked the bucket, they return it to its original position. On the side with the inside jailbreak, our outside receiver is working his take-off route to sell a deep ball.

We sometimes put a third quarterback on that side to throw a deep ball so we can use that effort and insure he goes full speed.

We also add a finish point to this drill with one of our coaches standing 10 yards beyond the buckets. We want this drill to be a race between those two receivers catching the ball to get there and score first.

Our quarterbacks spin the ball to themselves and get their screen drop. Our quarterbacks’ coach stands behind coaching them on the proper drop and backpedal path. We do not utilize bags or tennis rackets in this situation like other teams because we want this drill to be rapid-fire and get as many reps as possible.

All of our receivers will get repetitions on one side and then switch to the other side and keep rotating until we have done this part of the drill for 2 minutes. We then quickly flip-flop the drill to work the same screens on the opposite side.

Phase 2 of the Drill 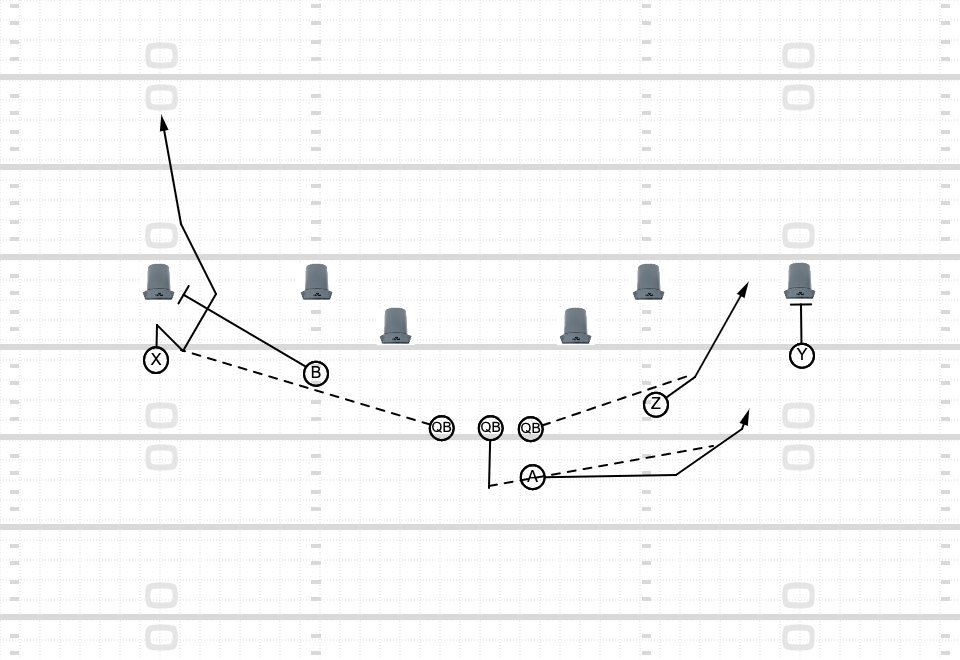 In the second phase of the drill in the above drawing, we line up again in a base 2×2 formation, but with 3 quarterbacks and 1 running back if we have the numbers to do so.

Another tip in setting up this drill is to align a coach or cones ten yards beyond your line of scrimmage as a finishing point for your receivers to “score” through.

If you want to go a high rate of speed, then you can’t be chasing all the errant throws that your wide receivers and backs will undoubtedly have trying to get the balls back to the quarterbacks.

In the drawing for Phase 2, you see that we have a similar setup. Again, we are working on blocking assignments on the perimeter. The key here for us is to work the bubble and tunnel screens. We will work the swing screen to the bubble side as well if we have the quarterbacks to do so. If not, we fold our running backs into the bubble line.

Again, our quarterbacks spin the ball to themselves but we are working on quicker and faster throws. I am a big believer that you only get good at bubble and tunnel through a ton of repetitions so we try to get as many as possible in 2 minutes then switch sides and work for another 2 minutes on the other side.

We again are having those receivers who catch the ball race 10 yards after they get the ball and try to be the first to score.

We will utilize our other formations in this drill as the season advances as we run key screen to #2 in a Trips set, but in the beginning, we want a lot of reps for our quarterbacks and receivers so we stick with our base 2×2 set until we really get the drill humming and running smoothly.

To drill wide receiver screens, you must emphasize getting lots of reps and do it often. Because the drill doesn’t require contact, you can do it any day of the week.

And because you can run this drill all the time, you can easily make wide receiver screens a big part of your offense and threaten to stretch the defense the width of the field every play.

This article was originally published in Headsets: Volume 1, Issue 2.