In this article, you will learn how to do exactly that through these five defensive line stance and start drills.

In the past, I have begun with putting my defensive linemen into a right or left handed stance and holding the position for me to correct before moving on to the first steps with a punch.

What I do now is work the actual hand punch/placement and hip explosion first before moving on to the stance. That way, when they are ready to work getting into a good three point stance, they have the other skills ready to use with their first initial steps and punch out of their stance.

I use these two drills for both my 7th grade linemen as well as my varsity line when we are in the spring and summer practice sessions or need work on the initial punch and hip explosion that are very important when coming out of their stances.

Drill 1: Punch From a 2-Point Stance

This can be done with pads, in cloth with hitting dummies, or with a sled. 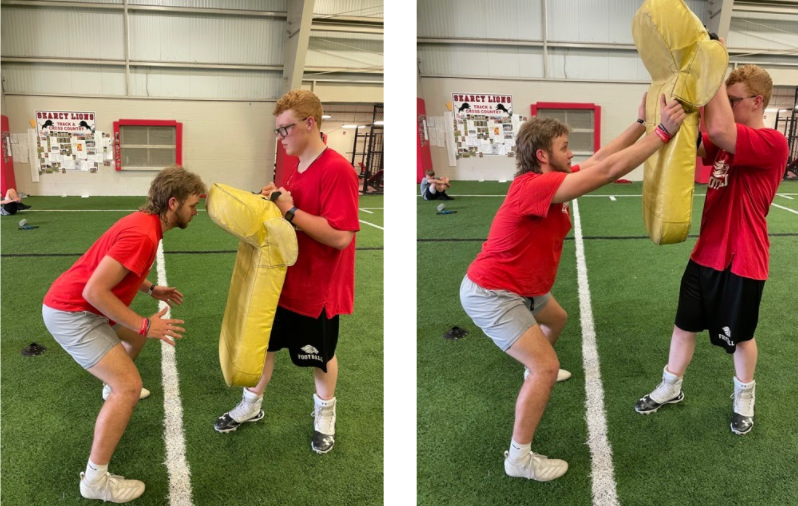 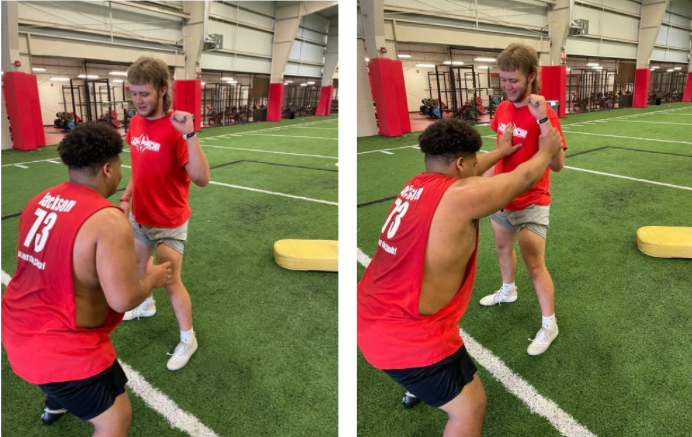 This stance and start drill can be done in pads, in cloth versus a dummy bag, or against a sled or surface that allows you to punch.

I coach seventh grade football as well as varsity at the school I am currently coaching at and this is one of the most difficult drills for players, both young and old, to master in terms of having a great stance.

I use three basic drills to get my players working from a three point stance.

By the time I do these three drills, I have already worked basic punching/hand placement technique from a two point stance (athletic position) as well as shooting hands and hips from a six point stance.

Have the defensive linemen get into lines of four, spread out to where they are comfortable and can get into a stance. I usually put them five  yards apart (diagram below).

You will do the same progression for the left handed stance as well except the left hand will be on the ground and the left foot will be back.

I like to have them put their arm that is not on the ground up and ready to strike when getting out of their stance.

Drill 4: One Step Punch (R/L handed stance or either)

This can be done in cloth with a dummy pad, in pads, or against a sled.

This can be done in cloth with a dummy pad, in pads, or against a sled.

Note: After a few reps you can skip the part where your players hold their position and have them reset for the next rep. Make sure to check them to see if they are watching the ball.

These five stance and start drills for your defensive linemen will help you set up your players to be successful coming out of their three point stances.

You can run these drills before or after you teach your defensive linemen how to get into a three point stance.

I prefer to do it before because it is much more enjoyable for my players to get to do something active instead of static when we begin practice as well as preparing them to take their first two steps and punch off the snap of the ball with good hips and hand placement.

This article was originally published in two parts in Headsets: Volume 1, Issues 7 & 8.