How to Build A Dominant Short Yardage Package

As a coach that loves pace and going fast, I always struggle with how to handle a short yardage situation.

I have completed many short yardage situations by simply accelerating and catching a defense off guard. There is a lot to be said about just doing what you do every down and running your normal offense everywhere on the field.

In the last few seasons I have had a change of heart on the short yardage and goal line packages. We noticed that it brings an extra level of energy to the team when we run this crew on the field and they hammer out 3 yards on 4th and 1 or we score on 4th and goal.

The Benefits to Having a Short Yardage Crew

There are benefits to both ways of handling these situations, so we will make sure we are prepared for both. I typically will keep the base offense on the field if I feel like we have serious momentum at the moment. I don’t want to disrupt the flow of the offense by having big personnel changes or slowing down.

I see this situation like a basketball game, you push and push while you have momentum and try to capitalize on it.

I will use the short yardage package when I feel like we have been struggling on a drive and I want to really shift momentum in our direction. There is nothing like converting a short yardage situation when everyone knows what is coming and you just dominate.

What You Need to Evaluate

Each year when we develop our short yardage package we ask these questions:

Let’s dive in to each question.

1. What personnel do we want?

I typically fill this need by bringing in extra OL if I have them to create gaps and then I find the toughest mid-sized hitters on our team. These are normally DL and LB’s. We bring them in and place them in the TE or FB position. We want hitters on this unit.

We need fearless people that will move their feet on contact.

2. Are we better at Gap or Zone Runs?

We will approach building these packages based on the run play we are going to use in the most important moment of a game.

If we are going to be a Zone team, then I do my best to create extra gaps for the defense to defend. The hope is that we stretch the defense so thin that no one can double gap and force pass-first defenders into run-first roles.

Here is an example of one of those formations we use:

It is hard to see but there are 5 down lineman on the left side of the center and only 3 on the right. The defense has a lot of guys close to the line trying to hold gaps that don’t want to be there.

The unbalanced look has also hurt them because we have 5 blockers to the left of the center and they also have 5, one is a safety at 6 yards and another is a corner playing 3×4 outside leverage.

If we are a better Gap team and we want to run power then we will use a formation that incorporates some FBs into the formation. If you look at the formation below we are a balanced OL (3 and 3), but on the snap we add 2 lead blockers to whatever side we need.

In this structure the defense is balanced with 5 defenders on each side and a non-factor safety. So again, we win the 5 v 5 battle. 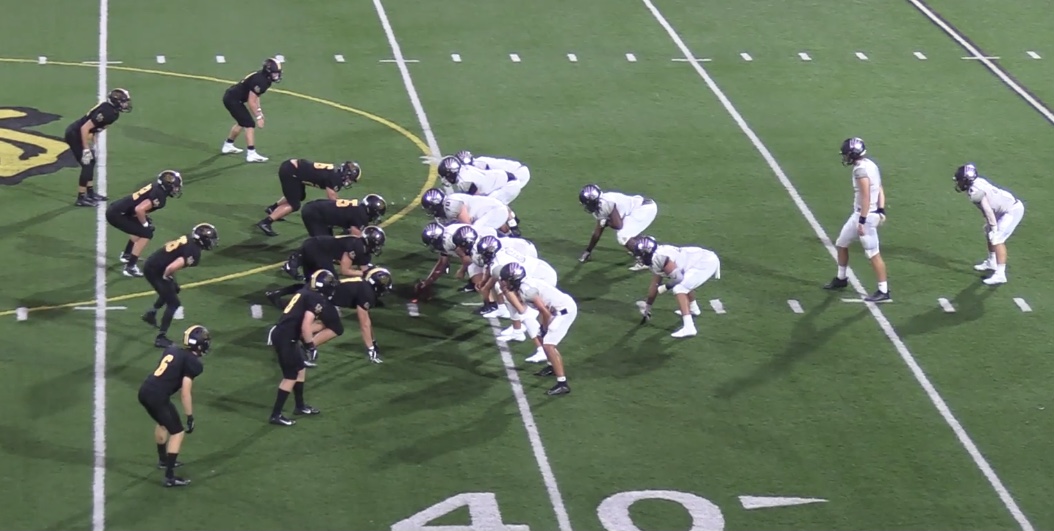 The backside MLB can run the hump and make the tackle, but you have hopefully gained 1 or 2 needed yards. On a side note, be aware of your staTEs policy on cutting. In Ohio, both players must start on the line of scrimmage and the cut must happen immediately. Every time I run power out of this formation I remind the officials that our FBs cannot be cut. Frequently the edge players will run in and take out our legs which should result in a penalty and free first down.

In this package we do not pull guards. With all the strange defensive front possibilities we don’t want to risk a run-through.

3. Do we want a passing threat?

In the formations shown above the only pass threat we have is play action to the TEs.

We have had success on this play, but play action in this situation is either a TD or a huge hit on your QB.

Sometimes we will split out our best WR and try to get single coverage or tempt the defense to move out an edge defender to help in pass coverage.

Here is a great example of how the WR gets respect by the corner moving out and they give us a soft edge on the right. We have great personnel to max protect or run power to the right. 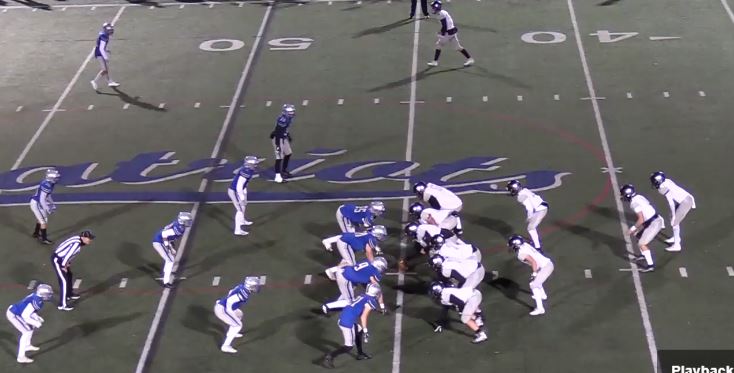 Below is another example of a team paying a lot of respect to our passing threat. 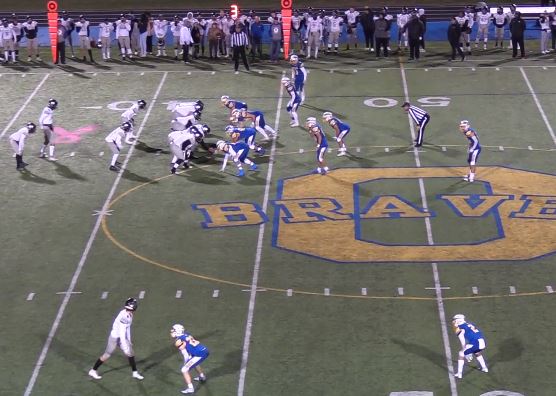 We removed 2 defenders by extending 1 and the safety in the middle of the field is staring at him, so clearly he is a pass-first defender, which means to the right we are 4 for 4 blocking on the snap with the two FBs.

Then there is the 0 passing threat approach.

We have had years where we want to add 10 blockers into the scenario and we either allow a variety of players to run the ball. The QB can run the ball or we can remove the QB from the game and let the RB receive the snap and run.

Obviously this decision becomes very limiting in play design and play calling, but may be the most effective at converting.

Here is an example of a direct snap formation that Kenny Simpson used. 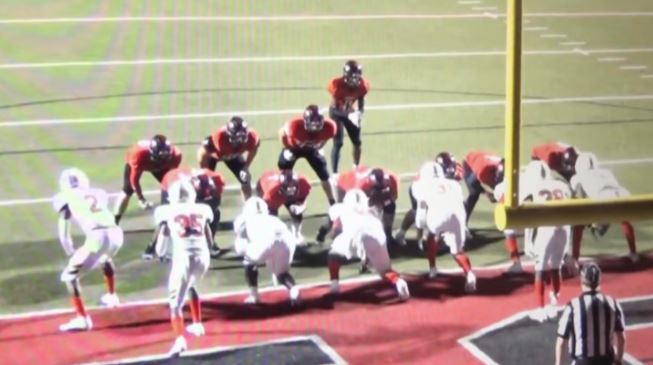 Another creative way to do this is have a call where the QB lines up at WR and the RB moves to catch the direct snap. I promise they will guard the QB, just in case they don’t, make sure your RB can throw it to a wide open guy.

4. How big do we want the playbook?

You must really decide how much of an investment you want into this package based on how much you plan to use it.

I will have games where it never gets used and others when the package does so well and the defensive alignment is so advantageous that I just leave them on the field until it gets stopped.

In a typical year I will have 2 base runs, a counter, a drop back pass and a play action pass. I try to keep all of the concepts the same as we would run in our normal offense. Remember that there is some personnel in the game that typically isn’t on the field for offense so keep things simple for them.

This may be the most important part. In our system we typically call packages “10” or “11” based on the number of RBs and TEs in the game, but we decided that this package needed to have a special name in order to set the tone for the moment.

One year we called it “Franchise” because this was the most important moment in the Franchise’s history and everyone was on deck. This season the players wanted it called “DQ” as in Dairy Queen, because when you are a little kid and you win a game a trip to Dairy Queen was always the reward.

Let the kids have fun with the naming and don’t be scared to change the name every year.

Our OL will get together with previous years and argue if the “Thunder” package of 2017 was better than the “DQ” package of 2020. It is amazing how much our players love the moments when our coach in charge of personnel yells out “DQ!”

Our players on the sideline know that many of the members of this unit are down talking with the defensive coaches during the game, so it gets yelled out by all of our coaches and players. Our student section even gets excited about this crew running on the field and they start chanting “DQ, DQ, DQ, DQ!” Every season this becomes a battle cry that our team rallies behind.

These packages can truly be beneficial to your program if you take the time to consider the above items.

You’ll excite your players and fans, as well as score some points in critical situations.

This article was originally published in Headsets: Volume 1, Issue 6.

Brent Morrison is a proud husband and father of two that has been the Head Football Coach at Westerville Central High School since 2018. The school was coming off two losing seasons when he took the position and in each of his first three seasons his team qualified for the Division 1(Largest) Playoffs in Ohio. During the course of each season the teams ranked in the top 10 according to the associated press and in 2020 made it to the Elite 8. In addition to being the head coach, he also serves as the offensive coordinator and a social studies teacher at the high school. Prior to taking the position he had been an assistant at Westerville Central since 2005. In his time as an assistant he served as the Offensive Coordinator and was recognized as Assistant Coach of the Year by the Central District.